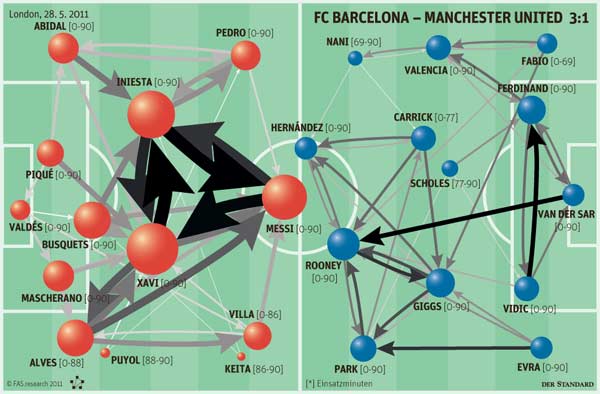 Taking a break from studying and figuring out applications needed for my group’s project for class, I started watching some of the highlights from the UCL championship game between FC Barcelona and Manchester United from Saturday afternoon. After watching the game on Saturday, I was kinda disappointed that Man United got beat handily by the team from Spain. Granted, I’m an Arsenal fan and definitely no Man United fan, I figured they would have prepared a bit better for the match when in fact they didn’t. The point of this article though isn’t to criticize Man United’s approach because they had to go about their own way to try to beat Barca.

The point of this article is understanding Barcelona’s approach to the game. What people don’t realize is that this team is, for the most part, the polar opposite of what most teams are these days. Most of their team is quite small. They’re also not the fastest team, nor the most physical team out there either. Yet, they manage to win games with such ease that it’s quite unbelievable. Sure, you can account skill for some of it, but when you watch their game, it doesn’t have the kind of explosive appeal that other teams might have, like say Real Madrid, Arsenal, or Manchester United. They don’t counterattack other teams nor do they regularly take powerful shots outside of the 18 (though Saturday’s game was definitely a change of pace with two goals scored from outside of the box from both Messi and Villa).

In order to understand Barca’s game, you have to understand Tiki-Taka. Tiki-Taka is the game in which you try to promote the short passing game, possession and patience. It’s not about getting goals quickly. It’s about controlling the pace of the game to your own pace. By controlling the possession, you not only enable the opportunities that you get to score goals, but also create few chances for your opponents to score, as well as tire them out from having to chase after you. The emphasis here is on the short passing. Rarely do you see a ball go across the field in the air in an attacking position such that they head the ball in. It’s just to create space and maintain control. END_OF_DOCUMENT_TOKEN_TO_BE_REPLACED

Maybe Sergio Ramos shouldn’t be allowed to hold trophies… He drops the Copa Del Rey underneath the parade bus.

As I was working on my second step for my sociolinguistics paper about UK English, I thought I would take a break and write about something else that’s along the lines of the U.K.: Arsenal. If you’re an Arsenal fan, you probably know the ups and downs that comes with being one. This season was definitely one of the more unusual seasons though in that we actually were in it for all four competitions that we were eligible for: League Cup, FA Cup, Premier League, and UEFA Champions League. Yet in a matter of weeks, it’s pretty promising that we’ll go away without silverware yet again. So what went wrong this season? A few things come to mind: END_OF_DOCUMENT_TOKEN_TO_BE_REPLACED

So I’ve played in the city soccer recreational leagues for about four years now. And in those four years, I’ve played against two of my old teams. It’s been pretty mixed in terms of experiences.

When I first started playing in the leagues, I had joined up with one team as a keeper with a few friends. However, we eventually left to start our own team since we’d be interested in doing so for quite a while. That summer we jumped up divisions after dominating in our first season and I played that old team. I made a number of friends on that team, so despite the competitiveness and ferocity during the games, it was relatively friendly (minus the drama in one game after I kicked off a player from the team and them joining that old team). It was overall fun during that rivalry. Heck, even some of them are on the current team today. END_OF_DOCUMENT_TOKEN_TO_BE_REPLACED

This is kinda fun to watch. Some guys from the European Tour trying to see if they can hit diminutive targets using only their club and golf ball. Some of these are pretty crazy.

END_OF_DOCUMENT_TOKEN_TO_BE_REPLACED

So if you have no idea what I’m talking about… The whole idea of fantasy sports is that you’re the owner of a team of a specific sport, whether it be basketball, soccer, football, baseball, or whatever else there is out there. Before a season starts (or very early in the season), you select players to “play” for your team. Over the course of the season, they accumulate stats for your team. Depending on the format, you may face off against other teams and the team with the most points or most categories won, wins that week. Or you could try to accumulate the most stats over the course of the entire season and try to finish as high as possible. Millions and millions of people all over the U.S. and the world participate in some sort of fantasy sports. Some do it for money, others do it for pride.

When I see myself playing it, I think “Geez, this is such a roller coaster ride… Ugh.”

END_OF_DOCUMENT_TOKEN_TO_BE_REPLACED

So I saw this on CNNSI.com, where they also forwarded a link to Yahoo! Sports. It was a game between Toronto and Montreal where the game was tied 30-30. Now be aware that there’s a few different rules for Canadian football. For example, you can score a single point (called a rouge) if the ball flies past the backline or sideline of  the endzone. Also, you can kick the ball as well to clear it (or to attempt to score a rouge). Anyway, here’s the video of Montreal attempting to score the game winning field goal but… Well, you can watch it for yourself.

If you haven’t heard, LeBron James is no longer a Cavalier. He jumped ship and went to South Beach to be on the Miami Heat with Dwayne Wade and Chris Bosh, forming the new “Big Three”.  But  this Big Three wasn’t formed in the same way that the former Big Three was by the Celtics (Garnett, Pierce, and Ray Allen). No trades were made. No huge sacrifices made by the Heat, aside from being well over the salary cap. They just got commitments from LBJ and Bosh via free agency.